Chromebooks have had a screen capture tool for quite awhile which allows you to take a picture or record a video of your screen.
Well now Google is rolling out a new more powerful tool for Chromebooks called Google Screencast.
With Google Screencast you can:
This is an easy way for teachers to create instructional videos, and for students to make recordings to demonstrate their understanding. Let's take a look at how Google Screencast works!
See below for my 13-minute tutorial video where I do a hands-on demonstration of this new tool, as well as a longer 41-minute interview I did with Andy Russell, Product Manager for Chromebooks in Education, where he talks more about Google Screencast and another new tool called Cast Moderator.
Eric at 10:01 AM No comments:
Share 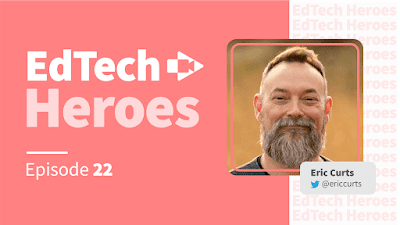 I recently had the pleasure to be a guest on the "EdTech Heroes" podcast from Screencastify.

As many of you may know, I am a huge fan of Screencastify and have shared many blog posts and training videos on how this awesome tool can be used by educators and students for teaching, learning, creativity, communication, and more!

Some of my earlier posts include:

Well it turns out that Screencastify also does a podcast (which is another one of my favorite things!) The podcast is described as follows:

EdTech Heroes is a podcast for educators, administrators and those who are interested in how education will advance in the future. In each episode, a member of Screencastify’s team interviews those who are at the forefront of education. Each conversation helps uncover how educators are connecting with K-12 students by using innovative technology and techniques. Ultimately, EdTech Heroes helps education professionals understand how to overcome challenges in the “new classroom”, become a better teacher and influence the minds of a future generation.

I was so excited to be a guest on the show, where we discussed tools teachers need, being a life-long learner, innovating with technology, great online resources, and of course the power of video for teaching and learning. Check out the podcast below in video or audio format.