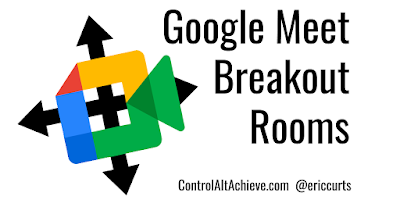 Breakout Rooms are an awesome feature of Google Meet that allow you to take all of your meeting participants and split them up into smaller Meets where they can work on group projects, have small group discussions, and such.

Note: The official Breakout Rooms feature is only available for people who are using the Enterprise version of the Google suite of tools. If your school does not pay for the Google tools, but instead uses the free version, you will not have the breakout rooms tool, as well as other Enterprise features. I do have a separate video where I cover an alternate way to do breakout rooms in Meet if you are using the free version which you can see here: Breakout Room Alternatives for Google Meet

However, for those who have the Enterprise version of Google Meet, I have put together a short 5-minute video on how to use the official Breakout Rooms feature. See below for the video.

Here is my quick 5-minute video on how to use the official Breakout Rooms feature in Google Meet:

Note: See all of my Google Meet help videos here:
"Video Series: How to Use Google Meet"